“On successful completion of my degree I made the sacrifice and commitment to reach the London 2012 Olympics. Since 2008 this has been my ultimate goal, certainly not my only goal but definitely the main one.” 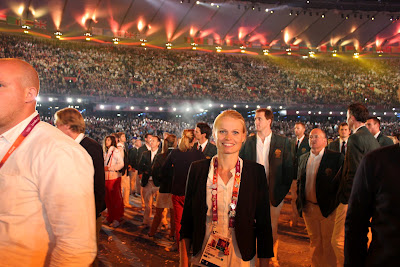 Closing out a four journey at the closing ceremony of the London 2012 Olympics. No better way to reassure myself that the correct belief and approach works. Know what you do, believe in it and go and get it.
A sacrifice to not only to be the best athlete I can be but to develop an entire business model into one of meaning and value. The purpose? Earning support and realizing a dream.
This goal, like most is something that I have certainly not achieved alone. I often get the question how do we do it? How do, we as athletes, set ourselves a goal, accomplish this goal and then build beyond this? The answer is pretty simple and does not need so much thought. Support.
Without support, so many others and I simply could not have done it. No matter how big or small the level of support is, it all plays a vital role in the daily ‘cog turning’, required to reach an Olympic start line. But how much support does exactly go into an Olympic campaign? Honestly it cannot be measured. Reaching the Olympics is simply not done alone, somewhere, somehow each an every athlete is supported, some more than others but we are all supported.
But how do we get support? We have to earn it. Just like a paperboy has to earn his pennies and just like a day-to-day businessperson earns their wage. Earning support is part of the professional sports lifestyle.
Achieving support does not happen over night. Realizing dreams isn’t something that just happens. It takes a commitment and a true understanding of what is needed. Do not be afraid to commit and adopt an approach that is right for YOU. We are all different and all have different needs. However one thing is for sure support does not come easy and neither should it. If we want something and want support in getting it we must show our value. Identify what your goal is, understand what is needed, what support group you need to connect with then seek ways in which you can, not only receive support but more importantly, give back for the support that is given to you.
Having missed the Beijing Olympics through injury, I committed to making the London 2012 games. I knew it would take countless hours of training, pushing the body to its absolute physical limit. As well as a tremendous race and training effort I realized I needed additional value as an athlete, not only race results but market value. Triathlon was and is not F1 racing, I am not a World Champion or past Olympic medalist so I needed to think outside the box to build support. I needed to bring additional value to potential sponsors. I started to build what is regarded as a ‘marketable brand’. I started investing my own money in earning support.
In 2009 I sat down with business advisors, I took on an advisory team of marketing experts, I invested in a graphic designer and slowly but surely I got to work on creating a business module. A business module that combined with my education, ethics and professional sports career aimed at bringing added value and meaning to supporting businesses. What I stood for and believed in as a person and athlete was now able to come to the surface. Self-branding was now taking place.
Now honestly back in 2009 social media, self-branding and entrepreneurship was not no.1 on my ‘to do’ list. I was a little stubborn and ignorant back then to what was really needed as a professional athlete. As trends developed it became very clear it was a great asset and tool to have and be good at all three. Therefore I adopted them, thought differently and now they are a regular part of my life as a professional athlete. Now this will change like all things, but being open minded to things that can develop and benefit you as a true professional is a strong piece of advice I will pass on to anyone. 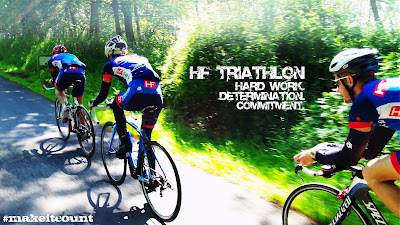 In 2011 I realized the need for athlete and enthusiast guidance. True support and backing to those who need it most. HF Triathlon became my first step into the world of added value. www.hftriathlon.com 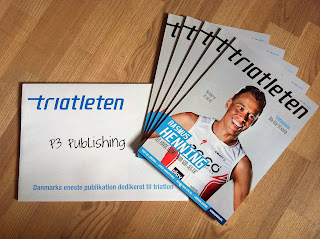 In early 2012 I was presented an opportunity, to invest money, very little time and act as a business advisor to a publishing company. The publishing company had serious plans and visions in an area I was passionate about. I got on board, I realized would it could do for the sport in our country and understood the added value it brought to my entire business module.  My role in P3 Publishing is almost zero, I input my advice when required and contribute when asked. P3 Publishing became my second step into the world of added value.

Over time, through continuing to be innovative with my approach my support group towards London 2012 became absolutely rock solid. Becoming an Olympian would have been a tougher task without their support and backing. I am very proud to say that ‘London 2012 was supported by…’ all of the following and so many more.
Ben Powell – Partner
Joel Filliol – Current Coach
Bente Frederiksen – Mother
Ib Frederiksen – Father
Claus Frederiksen Houmann – Brother
Merete Rønmos Houmann – Sister in law
Per Skaarup Frederiksen – Brother
Gitte Skaarup Frederiksen – Sister in law
Nike International – Johnny Nielsen, Anne Holm and Chris Bakker
INOPI – Claus Due and Claus Hoffmann
LOOK Bicycles – Raphael Juene and Fanny Hugon
Maxim Nutrition – Ryan Hansen and Maxim Customer Service
Club La Santa – Michael Rygaard
Reynolds Wheels – Aaron Brougher, Mike Dufner, Jesper Thomsen and Lars Errebo
Sailfish Wetsuits – Jan Sibbersen
SRAM Bike Components – Jason Phillips and Jannie Thomsen
GoPro – Anders Elmholdt Pedersen
CeramicSpeed – Jacob Czismadia and Martin Banke
Kaiser Sport – Jan Steinicke and Thomas Kaiser
Osteopatisk Klinik – Claudio Colombi
CycleFit.de – Lloyd Thomas
Michael Krüger – Previous Coach
DTRIF – Morten Fenger
Team Danmark – Jesper Fricast, Morten Rodtwitt and Lars Green Bach
Team Danmark Medical Team – Morten Storgaard, Kim Balling, Kim Larsen and Michael Ries
International Triathlon Union (ITU)
Henrik Hesselholdt – Accupuncture
Bjørn Andersen – Physioteraphy
Oliver Powell – Graphic Designer
Greg Diment – Sports Physchologist
Lars Smith – Sports Consultant
Miguel Angel – Osteopath Therapist
Danielle Hooijschuur– Massage Therapist
Farum Svømmehal – Local swimming pool
Vinderup Svømmehal – Jørn Vendelboe Pool in West Jylland
Farum Elite Team – Jacob Petersen Bach, Jens Toft, Rasmus Petræus, Allan Steen Olesen, Rasmus Henning, Søren Binderup, Ole Vinegaard, Emilie Hoff, Tanja Larsson, Jens Grønbek, Andreas Schilling and Casper Stenderup.
There are many names I could have mentioned however these above were crucial and involved on a day-to-day basis at some point during my road to London. I hope it gives you some idea of the level of support required to take on an Olympic campaign but also how support is achieved.
There is one person that is simply my ‘chain’ connecting all the cogs. My partner Ben has just been, and continues to be – rock solid; he took on and does take on so much for me. My daily stresses and strains all of a sudden became his daily stresses and strain. He frees up time that is vital as an elite athlete requiring 25 – 30 hours of training per week. He certainly knows what he does and knows what is required to become successful. He continues to lead what I regard as a team. He has certainly kept me in check but most importantly kept me grounded and appreciative of all that is given to me in the way of support. 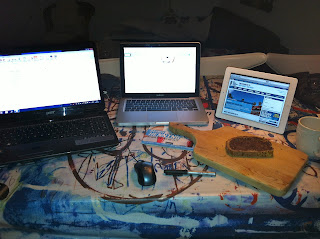 Ben is very humble when it comes to receiving praise. He is good at what he does and it is not without reason, hard work and commitment. This is a common image when Ben says “I have an idea…”
The team that will take me to Rio 2016 will no doubt differ slightly. Over the past 4 years I have worked on being an all round professional sports person. Opted for a business mind to get by in what is regarded as an unstable sector for financial reward. For the next four years I will continue to do this. I am committed, focused and driven at building this business module that continues to carry value beyond training and racing, further enhancing my support/sponsor group. This is what has allowed me to push my body so far, in order for me to continue seeking my potential I will continue on the path I believe in. I am excited about the road ahead, already now the pillars of support become stronger and hold more long-term value. 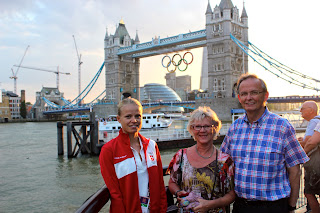 Mor and Far Frederiksen have certainly been priceless in their support of my career.
Thank you greatly for all your continued support, your interaction, emails and general messages have a great part to play in my role as a professional triathlete.
Regards
Helle x
0
SHARES
FacebookTwitter