”To realize a dream we need to overcome nightmares”
As we now get ever closer to the 4th August, I am very close to realizing my childhood dream of competing in the Olympic games. As the foreword states, to realize a dream we need to overcome nightmares. This blog post, part 1 of a two part blog post on ‘Realizing a dream…’
Dreams, long-term goals and commitments certainly do not come easy. Often people set their goals and before their journey has even begun they pull the plug and re-assess. Why? Because they hit a stumbling block in the road, they faced an obstacle that was not in the ’dream’. Well in short, the script that takes us towards our dreams and goals is very rarely written, as we would like it. In order to achieve what we believe we can achieve we need to make sacrifices, we need to ride the storm and most of all we need to accept that pain and defeat is all part of the process of becoming successful.
I, for one, can certainly speak of this first hand. My journey to London 2012 Olympic qualification has certainly not been a straightforward one, and now despite being qualified I am still rising above the nightmares to fulfil what I set out to fulfil. Whilst I write this I am sure there are athletes and persons out there that have suffered far greater nightmares than I have, yet they still remain successful, why? They can take a hit, they can rise above defeat and most of all they believe in their ability to succeed.
My London 2012 Olympic journey started as the 2008 Beijing Olympics began.  I missed qualification to Beijing due to inexperience, rushed progress, which ultimately broke me. Whilst studying for my Master degree in Human Nutrition at the age of 26 I suffered with a discus prolapse. This ended all hopes of reaching the games and also made my final months of study extremely painful and tiresome. On successful completion of my degree I made the sacrifice and commitment to reach the London 2012 Olympics. Since 2008 this has been my ultimate goal, certainly not my only goal but definitely the main one.
Learning from the mistakes I made before Beijing, I set about making extreme sacrifices. I committed 100% to being the best I can be. I made a conscious decision to step away from all the things that had a negative effect on my career i.e. social life, location and surroundings. Whilst adopting a level of professionalism and commitment that has seen me obtain one of the worlds leading support teams. I knew that, if come London 2012, I could look at myself and say I did everything I could, I would then have no regrets.

(2009 Kitzbühel WCS took into the barriers 5 m from the dismount line)
2009 was all about gaining experience, re-generating my health and becoming stronger. This accomplishment did not come without its ‘nightmares’.  Two unavoidable crashes really had a lasting effect on my body. The second of the two crashes, which happened in London WCS event, left me with chain ring marks in my neck, minor plastic surgery on my chin and permanent scars on my face.  This combined with the fact the National Federation thought there was no better time to inform me that my funding for that year had been cut. Coupled with being told by an unnamed coach I should ‘give up and get kids’, mentally over coming these setbacks was difficult.  In this instance I had two choices, give up or get stronger…get stronger I did. My fire and determination to overcome all the ‘haters’ and ‘disbelievers’ suddenly tripled in strength. I believed in myself, I knew what I wanted and I was not ready to give up. 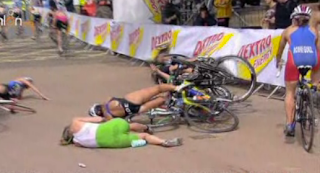 (2009 London WCS brought down by an inexperienced rider. Resulting in a 6 girl pile up, I, unfortunately am underneath all the bikes)
Finally back on track and ready to get the 2012 Olympic qualification period underway, 2010 decided to throw up even greater challenges. Yet again involved in an unavoidable crash, this time in Madrid ITU WCS. This was the first race of the Olympic qualification period, the crash, to this day, still mentally affects me. It is one thing to crash when you are to blame but it is another thing to crash 3 times in major races with each crash being absolutely no fault of your own. This is when you start to ask the questions why? Why me. Finding answers to the why questions do not come over night, in fact they do not come easily at all. Instead over time I have realised to not even ask why? Accept what is thrown at you, find a way of dealing with it and do everything you can to rise above it. 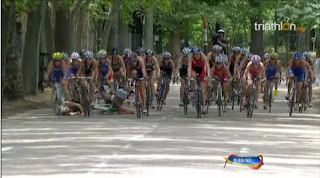 (On approach to T2 in Madrid 2010, this is probably the biggest female crash in ITU history still has its effects today)
2011 saw me firmly establish my bid to qualify for the games. A number of respectable results meant I was, despite all the previous ‘nightmares’ on course for qualification. However, like previous years, success comes at a price. Burnt feet and a rare parasite infection meant my 2011 season was yet again not smooth sailing.  Now you are probably reading this and thinking, has this girl had any positive experiences? Yes!! Of course I have, these I will address in part 2 of this blog post. This blog is written to highlight, success comes at a cost and in order to achieve it we need to overcome the nightmares, deal with the defeats and accept some degree of pain. 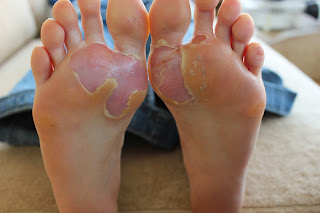 Finally here we are, 2012, after a commitment that has lasted 4 years, my selection to the London 2012 Olympics has been confirmed. This confirmation brought the biggest amount of relief and satisfaction a human being can encounter but as has been the motto of this blog post – every success story has its nightmare and I am still rising above them. One month after my return from my early season travel, I was diagnosed with a stress fracture of the 4thrib. The cause asthma and undiagnosed birch allergy combined with a desire to keep pushing the body to its absolute limit. Fortunately I am now experienced enough to deal with these tough situations. With the help of my amazing support team Claudio Colombi (Osteopath), doctors, physiotherapist, masseurs and modern day recovery instruments I am as strong as I was early season. 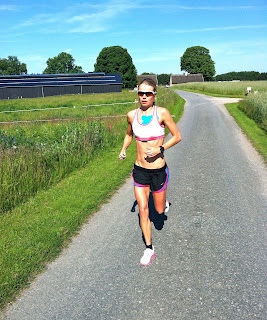 As we are now less than 50 days away from the female Triathlon event in London, I can look at myself and say; I have absolutely no regrets. I committed to achieving my goals, I knew the journey would be tough (perhaps not quite this tough but certainly tough) and I overcome the pain and rose above the defeats.
I will be on that start line in London ready, not only ready to be a part of the world’s greatest event but ready to do what I can to make a difference.

When setting your own personal goals, firstly be realistic but do not be afraid to aim high, secondly understand it will take time and things will not happen over night, thirdly be prepared to make sacrifices and lastly understand pain and defeat is all part of the process to success.

Part 2 in this ‘Realizing a dream…’ will be written over the coming days, highlighting exactly how my success and qualification has been achieved. No talk of nightmares 😉

Thanks for all your continued supported.