A step forward and a step on the podium

This past weekend saw me racing in the beautiful town of Karlovy Vary, Czech Republic. I had chosen to race this European Cup event as part of a consistent training block. All in preparation for Beijing and Yokohama WCS.

I made the short flight over from Copenhagen, Denmark on Friday morning. This allowed me plenty of time to relax and settle. I had raced and won Karlovy Vary European Cup in 2008 so I knew what I was in for. A very tough race over an extremely tough race course. Conditions on race day were perfect. Clear blue skies with temperatures reaching mid 20’s.

As race start approached I was relaxed and confident. The 3 lap swim consisted of a tough uphill exit after every lap. I positioned myself well through the first lap and exited the water in 3rd position. Upon entering the water again it was clear that there was a break away of two athletes ahead of me, Gaia Peron (ITA) and Rahel Kueng (SUI). The gap was a little to big for me to bridge. I positioned myself towards the front of the lead chasers. It was a tough swim. Entering T1 you could definitely feel the uphill exits in your legs. I had a smooth T1 and exited leading the chase group. The two leaders had now managed to put 30 seconds into the main bunch. Impressive swimming. 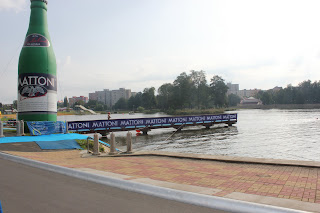 Once onto the bike my legs instantly felt good. We ascended out of the lake area and headed back to town. 6 laps in and around the city made for some hard riding. ‘Heart Break’ hill greeted us on each lap. 21% at its steepest and approx. 500m long. Ouch. There were some strong athletes in my group of chasers Agnieszka Jerzyk (POL), Radka Vodickova (CZE), Daniela Chmet (ITA) but still we could not get ourselves organised to reel in the leaders. I rode solid. I was here for a tough session and therefore I made sure I worked hard. ‘Heart Break’ hill was having its effects on the chase group. Originally 10+ athletes finishing with 5. The leaders continued to ride well. Their lead by the end of the bike was a very respectable 1 minute 04 seconds. Now it was a case of could we catch them? 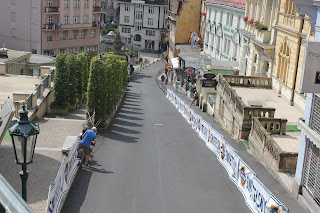 (The start of ‘Heart Break’ hill)

Quickly through T2 I set the pace in trying to catch the leaders. The run was the discipline I was most unsure about as my longest run during the 3 weeks leading into the race was no more than 10 km. Could I actually run fast? At what point would I suffer? Despite asking myself these questions I continued to push. Focusing on my cadence and form. I was quickly gaining on the two leaders. With Jerzyk on my shoulder I knew I was not alone in the hunt for the win. After 2 km we had taken 20 seconds out of the lead. Through 5 km and the lead was down to 10 seconds. Now I was confident it would be down to me and Jerzyk. What I was not so confident in was pushing the pace further. Through 6 km we had established the lead. I was now noticing my lack of race fitness, although I was reluctant to show it. Jerzyk tried many times to kick. Within the last 2 km the ‘elastic’ snapped, I could not hold her. Her final kick I was unable to respond. 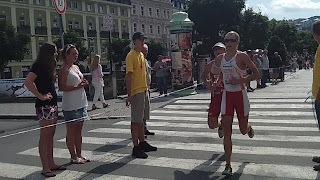 (Hunting down the lead)

Crossing the line in 2nd with a run split of 34’26” (I do estimate it to be around 150 – 200m short). I am very satisfied with my performance. It has now given me a clear indication of where things are at and what needs the most work. Tough course = sore recovery. I am now feeling the effects of such a hilly course. At least I should have no surprises come Beijing. I am confident I can now make big improvements in my race fitness and speed to perform well over in Asia in just under 3 weeks time. 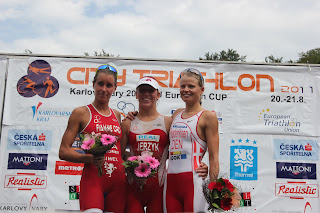 (A podium is always good for an athletes confidence)